Posted on December 11, 2012 by ShuichiShindou 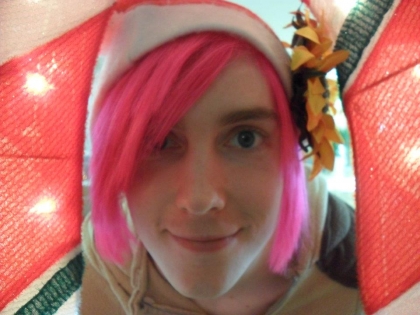 Well, it’s that time of year… and *sigh* -_-; Jack Frost seems to have skipped our state once again (I think the last time he paid a visit to Florida was the Ice Age). Nevertheless, like every other year, in defiance of that Grinch of a weatherman, we’ll string up our ornaments and pile up the fluffy synthetic snow in our department store holiday displays. Ohh, what I’d give to be able to enjoy roasting chestnuts over a warm fireplace (I currently have the air-conditioning on, and I’m still burning up >_<). If, like me, you’re still patiently waiting for the first snow against all odds, then have no fear, kindred spirits! S.S. HANAMI doesn’t have control over the weather (yet) but we can most certainly bring you more than enough Holiday Cheer to make up for this unfortunate lack of white. =D

Let’s flee the copious sand and palm trees, and run off together to a Winter Wonderland. Yep, I’m talking about HOLIDAY MATSURI — the “festive convention with holiday cheer” — THIS WEEKEND, December 14-16, at the Embassy Suites Orlando (Lake Buena Vista South.) And yep, S.S. HANAMI is going to be there to add to the entertainment. Head over to www.holidaymatsuri.com to check out the events and book your hotel room now.

S.S. HANAMI will be performing twice — Friday the 14th from 9:00-10:00pm and Saturday the 15th from 4:00-5:00pm — on the Second Stage. We hope to see you there. =P [Editor’s Note: a little bunny told me that, after the Friday show, Robbi might be making an appearance in The Otaku Army’s late-night Yaoi University panel at Midnight. <_<]

With that, I’ll leave you with links to the lyrics of the new yet-to-be-recorded songs we’ll be performing at Holiday Matsuri. For those who like to know the words beforehand:

Still waiting for the falling snow to take me in his arms,

This entry was posted in NEWS and tagged AMV contest, Holiday Matsuri, shows. Bookmark the permalink.